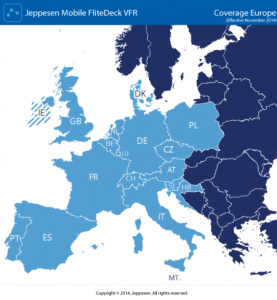 We hope that our new software release will find your appreciation and support your decision process moving forward.

Mobile FliteDeck VFR Version 2.0 intends to simplify your pre-flight weather familiarization and decision making. It delivers indications for safe VFR operations via a matrix-driven color overlay. For example, a red color overlay warns of severely adverse weather phenomena in a particular region – which could relate to icing, snow, low visibility or else. In doing so, Version 2.0 weather still adheres to the very same interaction methodology as its renowned ‘seamless zooming navigation’, providing further detail the deeper you zoom in. Right upon upgrade to Version 2.0, the new weather concept will automatically synchronize once a WiFi internet connection is established. The synchronization process can be managed in the ‘Downloads’ section, while the cellular reception remains part of the global settings of the iPad.

For actual use within the ‘Planning’ and/ or ‘Go Flying’ modes, Version 2.0 weather is considered an overlay. It can be switched ‘On’ or ‘Off’ in the pre-established ‘Overlay’ bar. 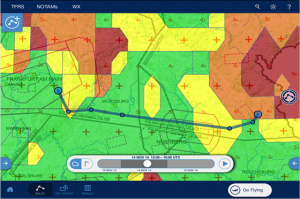 Unlike METARs, Version 2.0 wind and phenomena overlays rely on 3-hour high fidelity forecast intervals. Forecasts are calculated every 12 hours for a 10 NM by 10 NM raster, allowing for an exact breakdown of phenomena by tapping on a particular region (raster). Winds are available for ‘Surface’, ‘5000ft’, ‘10000ft’, and ‘15000ft’, with arithmetic wind averages and wind corrections calculated automatically upon zooming. As you may expect, these winds aloft are automatically populated into the NavLog supporting your route.

On the left side you can toggle between weather phenomena (color-coded overlays) and winds. The bubble represents the central artifact for sliding through multiple forecast intervals and days. It can be dragged over the level bar manually, or played as a video using the ‘Play’ button to the right.

Altitude selections for winds are available by selecting the windsock, then tapping on the displayed altitude indication.

‘Seamless Zooming’ Weather and Details Other than maneuvering through time and altitude using the weather controller, you can also interact through pinch zooming on the chart. Similar to the navigation methodology, zooming in will provide further detail – for instance will the colored tiles be supplemented through symbology. The symbols visible in lower zoom states focus on the most adverse phenomena – which correlate to the respective color coding. For a list of all downloaded phenomena for a particular region, simply tap on the screen: the known textbox will open, then outlining weather details next to airspace information.

The weather phenomena legend is accessible via the “overlay’ bar: